In this tutorial, we will go over the installation of the Elasticsearch ELK Stack on Ubuntu 14.04—that is, Elasticsearch 1.4.4, Logstash 1.5.0, and Kibana 4. We will also show you how to configure it to gather and visualize the syslogs of your systems in a centralized location. Logstash is an open source tool for collecting, parsing, and storing logs for future use. Kibana 4 is a web interface that can be used to search and view the logs that Logstash has indexed. Both of these tools are based on Elasticsearch.

Centralized logging can be very useful when attempting to identify problems with your servers or applications, as it allows you to search through all of your logs in a single place. It is also useful because it allows you to identify issues that span multiple servers by correlating their logs during a specific time frame.

It is possible to use Logstash to gather logs of all types, but we will limit the scope of this tutorial to syslog gathering.

The goal of the tutorial is to set up Logstash to gather syslogs of multiple servers, and set up Kibana to visualize the gathered logs.

The amount of CPU, RAM, and storage that your Logstash Server will require depends on the volume of logs that you intend to gather. For this tutorial, we will be using a VPS with the following specs for our Logstash Server:

In addition to your Logstash Server, you will want to have a few other servers that you will gather logs from.

Let’s get started on setting up our Logstash Server!

Elasticsearch and Logstash require Java, so we will install that now. We will install Oracle Java 8 (update 20 or later) because that is what Elasticsearch recommends. It should, however, work fine with OpenJDK, if you decide to go that route.

Install the latest stable version of Oracle Java 8 with this command (and accept the license agreement that pops up):

Run the following command to import the Elasticsearch public GPG key into apt:

If your prompt is just hanging there, it is probably waiting for your user’s password (to authorize the sudocommand). If this is the case, enter your password.

Install Elasticsearch with this command:

You will want to restrict outside access to your Elasticsearch instance (port 9200), so outsiders can’t read your data or shutdown your Elasticsearch cluster through the HTTP API. Find the line that specifiesnetwork.host, uncomment it, and replace its value with “localhost” so it looks like this:

Save and exit elasticsearch.yml.

Then run the following command to start Elasticsearch on boot up:

Now that Elasticsearch is up and running, let’s install Kibana.

Download Kibana 4 to your home directory with the following command:

In the Kibana configuration file, find the line that specifies host, and replace the IP address (“0.0.0.0” by default) with “localhost”:

Save and exit. This setting makes it so Kibana will only be accessible to the localhost. This is fine because we will use an Nginx reverse proxy to allow external access.

Let’s copy the Kibana files to a more appropriate location. Create the /opt directory with the following command:

Now copy the Kibana files into your newly-created directory:

Kibana can be started by running /opt/kibana/bin/kibana, but we want it to run as a service. Download a Kibana init script with this command:

Now enable the Kibana service, and start it:

Before we can use the Kibana web interface, we have to set up a reverse proxy. Let’s do that now, with Nginx.

Because we configured Kibana to listen on localhost, we must set up a reverse proxy to allow external access to it. We will use Nginx for this purpose.

Note: If you already have an Nginx instance that you want to use, feel free to use that instead. Just make sure to configure Kibana so it is reachable by your Nginx server (you probably want to change the hostvalue, in /opt/kibana/config/kibana.yml, to your Kibana server’s private IP address or hostname). Also, it is recommended that you enable SSL/TLS.

Use apt to install Nginx and Apache2-utils:

Use htpasswd to create an admin user, called “kibanaadmin” (you should use another name), that can access the Kibana web interface:

Enter a password at the prompt. Remember this login, as you will need it to access the Kibana web interface.

Now open the Nginx default server block in your favorite editor. We will use vi:

Delete the file’s contents, and paste the following code block into the file. Be sure to update theserver_name to match your server’s name:

Save and exit. This configures Nginx to direct your server’s HTTP traffic to the Kibana application, which is listening on localhost:5601. Also, Nginx will use the htpasswd.users file, that we created earlier, and require basic authentication.

Now restart Nginx to put our changes into effect:

Kibana is now accessible via your FQDN or the public IP address of your Logstash Server i.e. http://logstash_server_public_ip/. If you go there in a web browser, after entering the “kibanaadmin” credentials, you should see a Kibana welcome page which will ask you to configure an index pattern. Let’s get back to that later, after we install all of the other components.

The Logstash package is available from the same repository as Elasticsearch, and we already installed that public key, so let’s create the Logstash source list:

Install Logstash with this command:

Logstash is installed but it is not configured yet.

Now you have two options for generating your SSL certificates. If you have a DNS setup that will allow your client servers to resolve the IP address of the Logstash Server, use Option 2. Otherwise, Option 1 will allow you to use IP addresses.

If you don’t have a DNS setup—that would allow your servers, that you will gather logs from, to resolve the IP address of your Logstash Server—you will have to add your Logstash Server’s private IP address to thesubjectAltName (SAN) field of the SSL certificate that we are about to generate. To do so, open the OpenSSL configuration file:

Find the [ v3_ca ] section in the file, and add this line under it (substituting in the Logstash Server’s private IP address):

Now generate the SSL certificate and private key in the appropriate locations (/etc/pki/tls/), with the following commands:

The logstash-forwarder.crt file will be copied to all of the servers that will send logs to Logstash but we will do that a little later. Let’s complete our Logstash configuration. If you went with this option, skip option 2 and move on to Configure Logstash.

If you have a DNS setup with your private networking, you should create an A record that contains the Logstash Server’s private IP address—this domain name will be used in the next command, to generate the SSL certificate. Alternatively, you can use a record that points to the server’s public IP address. Just be sure that your servers (the ones that you will be gathering logs from) will be able to resolve the domain name to your Logstash Server.

Now generate the SSL certificate and private key, in the appropriate locations (/etc/pki/tls/…), with the following command (substitute in the FQDN of the Logstash Server):

The logstash-forwarder.crt file will be copied to all of the servers that will send logs to Logstash but we will do that a little later. Let’s complete our Logstash configuration.

Logstash configuration files are in the JSON-format, and reside in /etc/logstash/conf.d. The configuration consists of three sections: inputs, filters, and outputs.

Let’s create a configuration file called 01-lumberjack-input.conf and set up our “lumberjack” input (the protocol that Logstash Forwarder uses):

Save and quit. This specifies a lumberjack input that will listen on tcp port 5000, and it will use the SSL certificate and private key that we created earlier.

Now let’s create a configuration file called 10-syslog.conf, where we will add a filter for syslog messages:

Save and quit. This filter looks for logs that are labeled as “syslog” type (by a Logstash Forwarder), and it will try to use “grok” to parse incoming syslog logs to make it structured and query-able.

Lastly, we will create a configuration file called 30-lumberjack-output.conf:

Save and exit. This output basically configures Logstash to store the logs in Elasticsearch.

With this configuration, Logstash will also accept logs that do not match the filter, but the data will not be structured (e.g. unfiltered Nginx or Apache logs would appear as flat messages instead of categorizing messages by HTTP response codes, source IP addresses, served files, etc.).

If you want to add filters for other applications that use the Logstash Forwarder input, be sure to name the files so they sort between the input and the output configuration (i.e. between 01- and 30-).

Restart Logstash to put our configuration changes into effect:

Now that our Logstash Server is ready, let’s move onto setting up Logstash Forwarder.

Do these steps for each Ubuntu or Debian server that you want to send logs to your Logstash Server. For instructions on installing Logstash Forwarder on Red Hat-based Linux distributions (e.g. RHEL, CentOS, etc.), refer to the Build and Package Logstash Forwarder section of the CentOS variation of this tutorial.

On Logstash Server, copy the SSL certificate to Client Server (substitute the client server’s address, and your own login):

After providing your login’s credentials, ensure that the certificate copy was successful. It is required for communication between the client servers and the Logstash server.

It also uses the same GPG key as Elasticsearch, which can be installed with this command:

Then install the Logstash Forwarder package:

Note: If you are using a 32-bit release of Ubuntu, and are getting an “Unable to locate package logstash-forwarder” error, you will need to install Logstash Forwarder manually.

On Client Server, create and edit Logstash Forwarder configuration file, which is in JSON format:

Under the network section, add the following lines into the file, substituting in your Logstash Server’s private address for logstash_server_private_address:

Under the files section (between the square brackets), add the following lines,

Save and quit. This configures Logstash Forwarder to connect to your Logstash Server on port 5000 (the port that we specified an input for earlier), and uses the SSL certificate that we created earlier. The pathssection specifies which log files to send (here we specify syslog and auth.log), and the type section specifies that these logs are of type “syslog* (which is the type that our filter is looking for).

Note that this is where you would add more files/types to configure Logstash Forwarder to other log files to Logstash on port 5000.

Now restart Logstash Forwarder to put our changes into place:

Now Logstash Forwarder is sending syslog and auth.log to your Logstash Server! Repeat this section for all of the other servers that you wish to gather logs for.

When you are finished setting up Logstash Forwarder on all of the servers that you want to gather logs for, let’s look at Kibana, the web interface that we installed earlier.

In a web browser, go to the FQDN or public IP address of your Logstash Server. After entering the “kibanaadmin” credentials, you should see a page prompting you to configure an index pattern:

Go ahead and select @timestamp from the dropdown menu, then click the Create button to create the first index.

Now click the Discover link in the top navigation bar. By default, this will show you all of the log data over the last 15 minutes. You should see a histogram with log events, with log messages below: 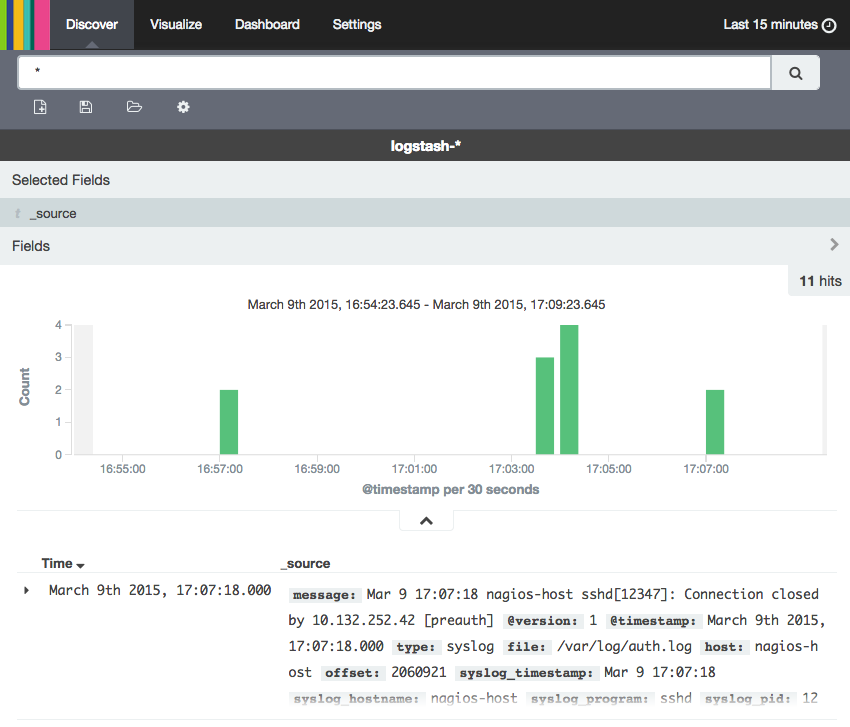 Right now, there won’t be much in there because you are only gathering syslogs from your client servers. Here, you can search and browse through your logs. You can also customize your dashboard.

Kibana has many other features, such as graphing and filtering, so feel free to poke around!