In this tutorial you will learn how to install and configure Skyline — a real-time anomaly detection system. It is able to analyze a set of metrics in real time without setting or adjusting the thresholds for each one. It is designed to be used wherever there is a large number of time series (hundreds of thousands) that need constant monitoring.

Let’s look at an example of a monitoring system with manually set thresholds. The figure below shows a graph for CPU load. Dashed lines indicate the thresholds of the trigger.

At point 1 in Figure 1, a process has started, and the CPU load has significantly increased. The trigger has been activated, and the administrator notices it. The administrator decides that it is within normal values and changes the trigger thresholds to the ones shown as the upper dashed lines.

After some time has passed, the trigger is fired again at point 2 in Figure 1. The administrator discovers that a second service is regularly making backups and causing the load increase. Then the question arises: Do you raise the threshold higher or leave it as is but just ignore the alarms?

Let’s take a look at point 3. At that moment, the event load falls, but the administrator was not informed because the threshold was not exceeded. The trigger didn’t activate.

This simple case shows us that there are some difficulties when trying to set thresholds. It is hard to adjust the threshold values to catch performance issues without triggering false positive errors or false negative errors.

To help solve these problems, Skyline has been created. It’s using a set of nonparametric algorithms to classify anomalous metrics.

The Horizon Agent is responsible for collecting data. It has Listeners, which listen for incoming data.

It accept the data in two formats: pickle (TCP) and MessagePack (UDP). It reads incoming metrics and puts them in a shared queue that the Workers read from. Workers encode the data into Messagepack and append it to the Redis database. The Horizon Agent also regularly trims and cleans old metrics usingRoombas. If this is not done, then all free memory will soon be exhausted.

The Analyzer Agent is responsible for analyzing the data. It receives a list of metrics from Redis, runs several processes, and assigns metrics to each of them. Each process analyzes the data using several algorithms. Each algorithm reports the result — whether data is abnormal or not. If the majority of the algorithms report that the current metric has abnormality, the data is considered anomalous.

All abnormal metrics are written to a file. On the basis of this file, an image is created and shown in the web application.

Redis is an open source key-value cache and store database.

Skyline stores all the metrics and encoded time series in a Redis database. When a data point comes in, a Horizon worker packs the datapoint with the schema [timestamp, value] into a MessagePack-encoded binary string and append this string to the appropriate metric key.

Figure 2 shows the diagram of interactions of the Skyline’s components.

To install Skyline, first install the required applications including some Python-related tools and the Apache web server:

Get the latest source files for Skyline from GitHub:

Install the following Python packages in this specified order:

Installation of some packages may take a long time, so please be patient.

Most of them are open source Python libraries used for scientific and technical computing. The msgpack-python package is necessary for reading and writing MessagePack data.

As we mentioned above, Skyline stores all the metrics in a Redis database, so you need to install it as well:

Start the Skyline and Redis services:

To test the installation, run the included test script:

You should see the following output:

The installation and basic configuration of Skyline is finished. Now you need to send data into it.

Step 2 — Getting Data into Skyline

You can write your own script or module to your favorite monitoring agent and have it encode the data with MessagePack to be sent to Skyline for analysis. Skyline accepts metrics in the form of MessagePack encoded strings over UDP. MessagePack is an object serialization specification like JSON. The format is[<metric name>, [<timestamp>, <value>]]. MessagePack has an API for most programming languages. More information and API examples can be find on the MessagePack official site.

This tutorial will show you how to send the data from Graphite and collectd to Skyline.

Getting Data from Graphite 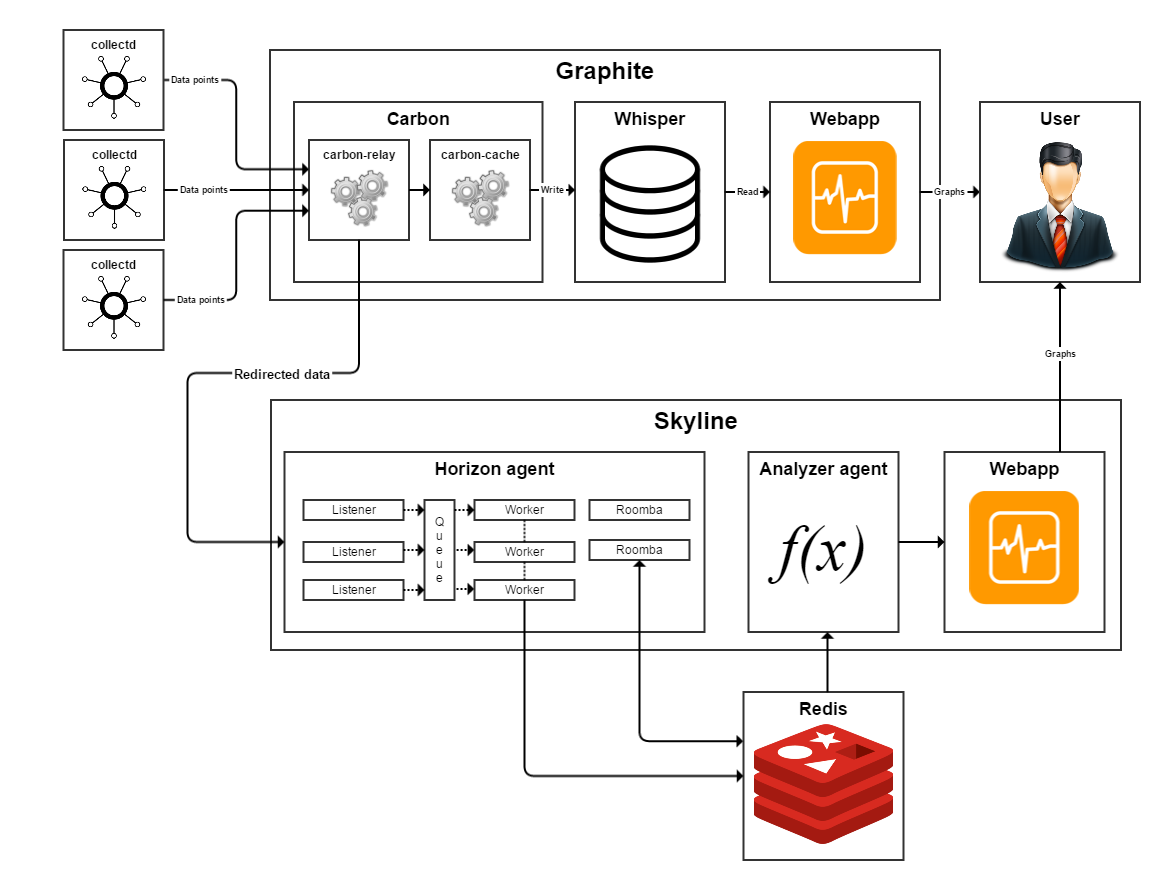 Figure 3 shows a schematic diagram of the data flow. Data from external monitoring agents (collectd,diamond, statsd etc.) or systems (Nagios, Icinga, Sensu etc.) are transferred into Graphite. Next, carbon-relay forwards the data into Skyline. Carbon-relay, carbon-cache, and Skyline may run either on a single host or on separate hosts.

You need to configure Graphite, collectd, and Skyline to get this data flow working.

If you did not copy the example relay-rules.conf to the proper location for the carbon-relay configuration file earlier, you have to do it now:

All destinations used in relay-rules.conf must also be defined in carbon.conf configuration file.

Open the carbon.conf configuration file to make this change:

Then locate the [relay] section, and edit the DESTINATIONS line:

Once you have made these changes, start the carbon-relay service:

In Graphite if you elected to password-protect the Graphite web interface, you must allow access from localhost without password for Skyline to work.

To do so, edit the Graphite configuration file:

Add the following lines in red to the <Location> block:

Then restart the Apache service:

Getting Data from Collectd

You can also configure collectd to send data to Skyline. Open its configuration file:

Change the port number in the <Plugin write_graphite> block to 2013:

To avoid confusion, Figure 4 shows a simplified scheme with the correct port numbers.

The correct port numbers are as follows:

Attention! If you start the Horizon agent and the optional carbon-aggregator on the same host, you must change their ports. By default they are both set to the same port 2024.

The Skyline configuration file contains many settings. Open the file for editing:

Each setting within this file is documented via informative comments in the file itself. At a minimum, you need to set the following parameters, replacing the text in red with your values:

The other options can be left to their default values. They are as follows:

After making these changes you have to restart the corresponding app:

Then you can open the link http://your_server_ip:1500 and see the Skyline webpage (Figure 5). It will display anomalous metric as they are found. 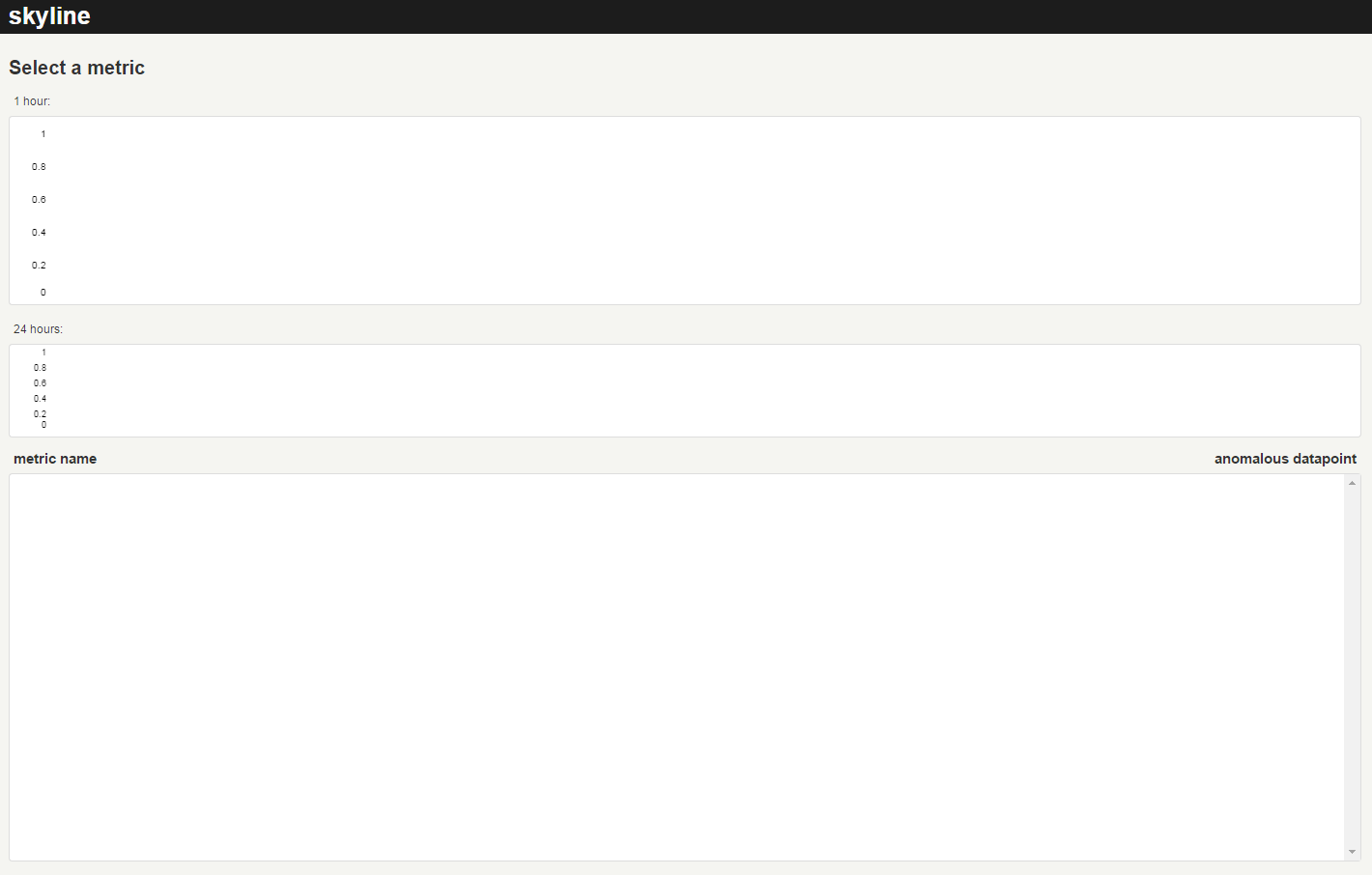 For Skyline to operate in its full capacity, you need to wait until the FULL_DURATION seconds has passed. By default, FULL_DURATION is set to 1 day (86400 seconds).

You should wait at least one hour to start to track anomalies. This will give Skyline time to accumulate information about the normal load levels. Try not to create extra load on the system while Skyline is establishing a baseline.

By default, Skyline displays detected anomalies in its web interface (http://your_server_ip:1500) as they are found and while they are still occurring. As soon as an anomaly disappears, its corresponding metric disappears from this interface. Therefore, you must monitor the webpage to see these anomalies, which is not always convenient.

You can configure email alerts so you don’t miss them.

To do so, open the Skyline configuration file:

Make sure alerts are enabled:

The first value in the schema is the process to monitor. In this case, it is collectd. The second value of the schema is smtp, which stands for email alerts. The last value of 1800 is in seconds. It means that alerts will not fire more than once within 30 minutes (1800 seconds) even if a trigger is detected. Modify this value to best suite your needs.

After making all these changes, you have to restart analyzer daemon:

To test Skyline, we can create a CPU spike with a bash command:

You can stop the command at any time by pressing CTRL-C. Several minutes should be enough to create an anomaly.

If you look at the Skyline web interface while running this command you will see the detected anomalies. An example is shown in Figure 6. 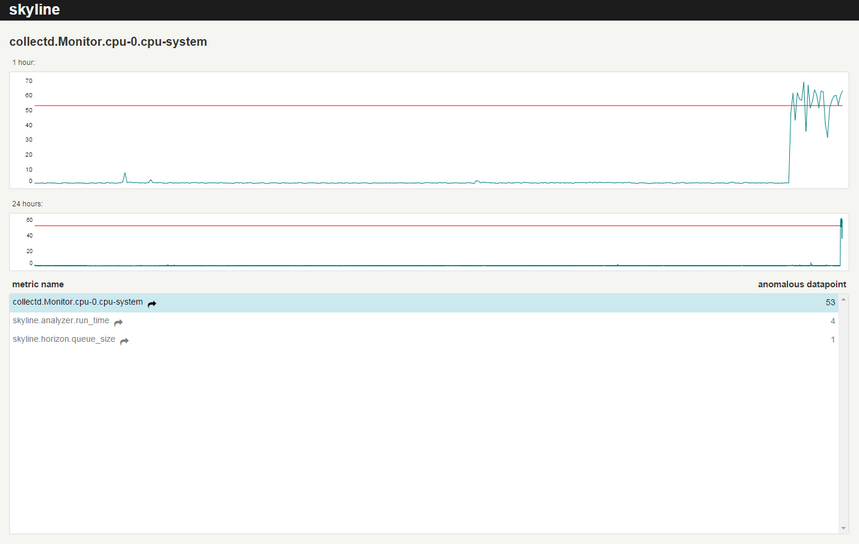 You can see that as a result of high CPU load, the speed of Skyline’s components decreased. All detected abnormal metrics are displayed as a list at the bottom of the webpage. When you hover over the name of one of the metrics, in the upper graphs you can see the corresponding time series for the last hour and the day. Clicking on the name of the metric to open a more detailed graph, generated by Graphite (see Figure 7 for an example).

CPU load did not reach extremely high value in this example, and the threshold was not exceeded. In this case a classical monitoring system was not able to find a deviation. Such case was mentioned earlier (Figure 1, point 3).

Unlike classical monitoring systems, Skyline can quickly find deviations and notify you about them.

As was mentioned earlier, Skyline is using a set of algorithms to detect anomalies. The following algorithms are currently implemented:

Most of them are based on the сontrol charts (also known as Shewhart charts) and the three-sigma rule. They use Python libraries SciPy and NumPy in their calculations.

You can customize any of the used algorithms. You can also modify, delete, or add new ones. To do this, you must edit the configuration file:

Each of the algorithms in this file is provided with a small description. For example, let’s examine the following algorithm:

Based on the nature of your data, you may need to change the threshold value from 6 to something else –4, 5, 7 etc.

Skyline is well proven in complex dynamically changing IT-systems. It may be useful to programmers who regularly make changes to the operating system and want to quickly detect anomalies in system metrics after a new software release.

Its main advantages include:

It also has some disadvantages: