Helm is a package manager for Kubernetes. You can bundle Kubernetes resources together as charts that define all the necessary resources and dependencies of an application. You can then use the Helm CLI to install all the pods, services, and ingresses for an application in one simple command.

In this post, I’ll show how you can use an AWS S3 bucket to host a Helm chart repository, how to push custom charts to it, and how to install charts from the chart repository. I won’t be going into Helm or Kubernetes in depth, I suggest you check the Helm quick start guide if they’re new to you.

If you’re not using AWS, and you’d like to store your charts on Azure, Michal Cwienczek has a post on how to create a Helm chart repository using Blob Storage instead.

Before you start working with Helm properly, youu need to do some setup. The Helm S3 plugin you’ll be using later requires that you have the AWS CLI installed and configured on your machine. You’ll also need an S3 bucket to use as your repository.

I’m using an Ubuntu 16.04 virtual machine for this post, so all the instructions assume you have the same setup.

The suggested approach to install the AWS CLI is to use pip, the Python package index. This obviously requires Python, which you can confirm is installed using:

However, running which pip returned nothing for me, so I installed it anyway using

Finally, we can install the AWS CLI using:

The last thing to do is to configure your environment to access your AWS account. Add the ~./aws/configand ~./aws/credentials files to your home directory with the appropriate access keys, as described in the docs 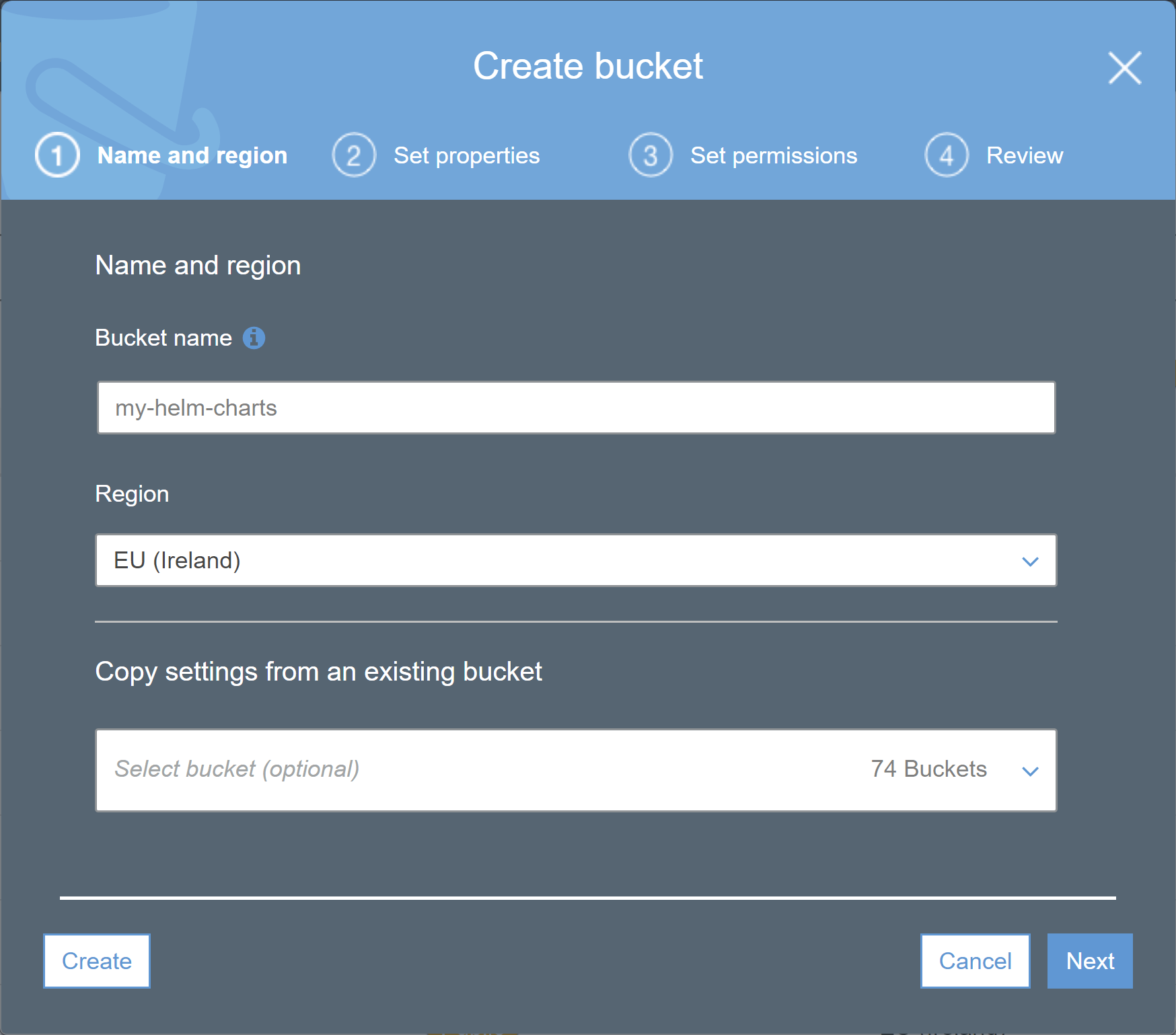 Whenever you create a new bucket, it’s a good idea to think about who is able to access it, and what they’re able to do. You can control this using IAM policies or S3 policies, whatever works for you. Just make sure you’ve looked into it!

Once your repository is working correctly, you might want to update this so that only your CI/CD pipeline can push charts to your repository, but that any of your users can list and fetch charts. It may also be wise to remove the delete action completely.

The final prerequisite is the Helm S3 plugin. This acts as an intermediary between Helm and your S3 bucket. It’s not the only way to create a custom repository, but it simplifies a lot of things.

You can install the plugin from the GitHub repo by running:

This downloads the latest version of the plugin from GitHub, and registers it with Helm.

The first thing to do is to turn the my-helm-charts bucket into a valid chart repository. This requires adding an index.yaml to it. The Helm S3 plugin has a helper method to do that for you, which generates a valid index.yaml and uploads it to your S3 bucket:

If you fetch the contents of the bucket now, you’ll find an index.yamlfile under the /charts key

Note, the /charts prefix is entirely optional. If you omit the prefix, the Helm chart repository will be in the root of the bucket. I just included it for demonstration purposes here.

The contents of the index.yaml file is very basic at the moment:

To work with the chart repository by name instead of needing the whole URL, you can add an alias. For example, to create a my-charts alias:

If you run helm repo list now, you’ll see your repo listed (along with the standard stable and localrepos:

You now have a functioning chart repository, but it doesn’t have any charts yet! In the next section I’ll show how to push charts to, and install charts from, your S3 repository.

Uploading a chart to the repository

Before you can push a chart to the repository, you need to create one. If you already have one, you could use that, or you could copy one of the standard charts from the stable repository. For the sake of completion, I’ll create a basic chart, and use that for the rest of the post.

I used the example from the Helm docs for this test, which creates one of the simplest templates, a ConfigMap, and adds it at the path test-chart/templates/configmap.yaml:

You can install this chart into your kubernetes cluster using:

and remove it again completely using the release name presented when you installed it (zeroed-armadillo) :

Now you have a chart to work with it’s time to push it to your repository.

Uploading the test chart to the chart repository

To push the test chart to your repository you must first package it. This takes all the files in your ./test-chart repository and bundles them into a single .tgz file:

Once the file is packaged, you can push it to your repository using the S3 plugin, by specifying the packaged file name, and the my-charts alias you specified earlier.

Note that without the plugin you would normally have to “manually” sync your local and remote repos, merging the remote repository with your locally added charts. The S3 plugin handles all that for you.

If you check your S3 bucket after pushing the chart, you’ll see that the tgz file has been uploaded:

That’s it, you’ve pushed a chart to an S3 repository!

Searching and installing from the repository

If you do a search for a test chart using helm search you can see your chart listed:

You can fetch and/or unpack the chart locally using helm fetch my-charts/test-chart or you can jump straight to installing it using:

To remove the test chart from the repository, you provide the chart name and version you wish to delete:

That’s basically all there is to it! You now have a central repository on S3 for storing your charts. You can fetch, search, and install charts from your repository, just as you would any other.

A warning – make sure you version your charts correctly

Helm charts should be versioned using Semantic versioning, so if you make a change to a chart, you should be sure to bump the version before pushing it to your repository. You should treat the chart name + version as immutable.

As of version 0.6.0, the plugin will block overwriting a chart if it already exists.

In a similar vein, you may want to disable the ability to delete charts from a repository. I feel like it falls under the same umbrella as immutability of charts in general – you don’t want to break downstream charts that have taken a dependency on your chart.